The Dollar Wrecking Ball: Why is a strong US dollar so dangerous?
Quotes by TradingView
|Timotej Herda|942x
Veľkosť písma:-/+

In addition to dangerously high inflation levels, supply chain bottlenecks, and geopolitical conflicts, the strength of the US dollar (USD) is adding insult to injury. The dollar has been on a relentless rise since the start of the year. The DXY index, which gauges the strength of the USD against a basket of currencies (mainly of its largest trading partners like the euro, Japanese yen, British pound etc.), has appreciated by more than 20%. The US dollar has specific attributes, which, when coupled with the current state of the economy, lead to a sharp appreciation of the USD against other currencies. The dollar that gets too strong can be troubling, especially for developing nations. The last time we experienced a similar problem was the Latin America Debt Crisis during the 1980s when several South American countries could not service their debts due to a strong dollar. It eventually led to a Plaza accord, where it was agreed to artificially devalue the US dollar.

The issue stems from the existing currency system, which puts the US dollar at its centre. Such a structure can sometimes produce undesirable consequences.

Thanks to its status as a world reserve currency, USD behaves differently during the business cycle compared to other currencies. As seen on the graph below, depending on the state of the world, we distinguish between three distinct phases. One is when the US economy is strong and outperforming (e.g. the tech boom from 1995-2000), represented by the left side of the graph. The other one is when the world is experiencing a steady level of growth, but the outperformance is seen, for instance, in emerging markets (e.g. 2002 – 2007, when China was booming); the middle part of the graph. And the last state, which is currently undergoing, is a synchronized global recession (right side), during which the USD tends to spike higher. The final graph reminds a smile, hence the name.

So, what aspects are causing the USD to strengthen, and why is it a problem for other economies? Let’s go through all the factors and their respective impacts.

The first factor currently influencing the dollar’s strength is the differences in the level of interest rates across countries. The US happens to have one of the strictest stances toward inflation. The US central bank (FED) started a fierce battle with inflation by significantly increasing interest rates. The fed funds rate, the base rate set by the FED, currently sits between 3% - 3.25%. The European central bank (ECB), on the other hand, started increasing interest rates later than the US and from a lower base (at the start of the year, the base rate in the EU was -0.5%; let this number sink in, a negative interest rate), hence its base rate is currently at 1.25%. Almost all developed countries have their interest rates set at a lower level: the UK (2.25%), Australia (2.6%), Denmark (0.65%), Switzerland (0.5%), Japan (-0.1%) etc. If a country has a high level of interest rates, it attracts foreign investors, especially when the economy is as stable as the US. Hence money started flowing into their bonds, which currently offer a very juicy interest. When investors want to buy US bonds, they have to purchase them in USD, thus creating demand for dollars and pushing up its value.

The perfect and most extreme example of this interest rate differential is Japan. Most developed countries run their economies in a very synchronized manner, so when one country is raising interest rates, all the others likely follow suit. However, Japan is a peculiar case. The country has been running a massive economic experiment for over three decades. To explain their economic situation would fill an entire book, so the only crucial thing to know is that they have no intention of raising interest rates. Their central bank is running a yield curve control, which means they are artificially suppressing interest rates and keeping them at -0.10%. The extremely low return on bonds forces Japanese investors to look for a yield abroad. To do that, they sell their Japanese yen, for example, for US dollars to buy US bonds. As a consequence, the Japanese yen has been rapidly depreciating, as you can see on the chart. It reached a point when the Japanese central bank had to intervene in the market and start selling its reserves of USD in exchange for the yen to support its currency. 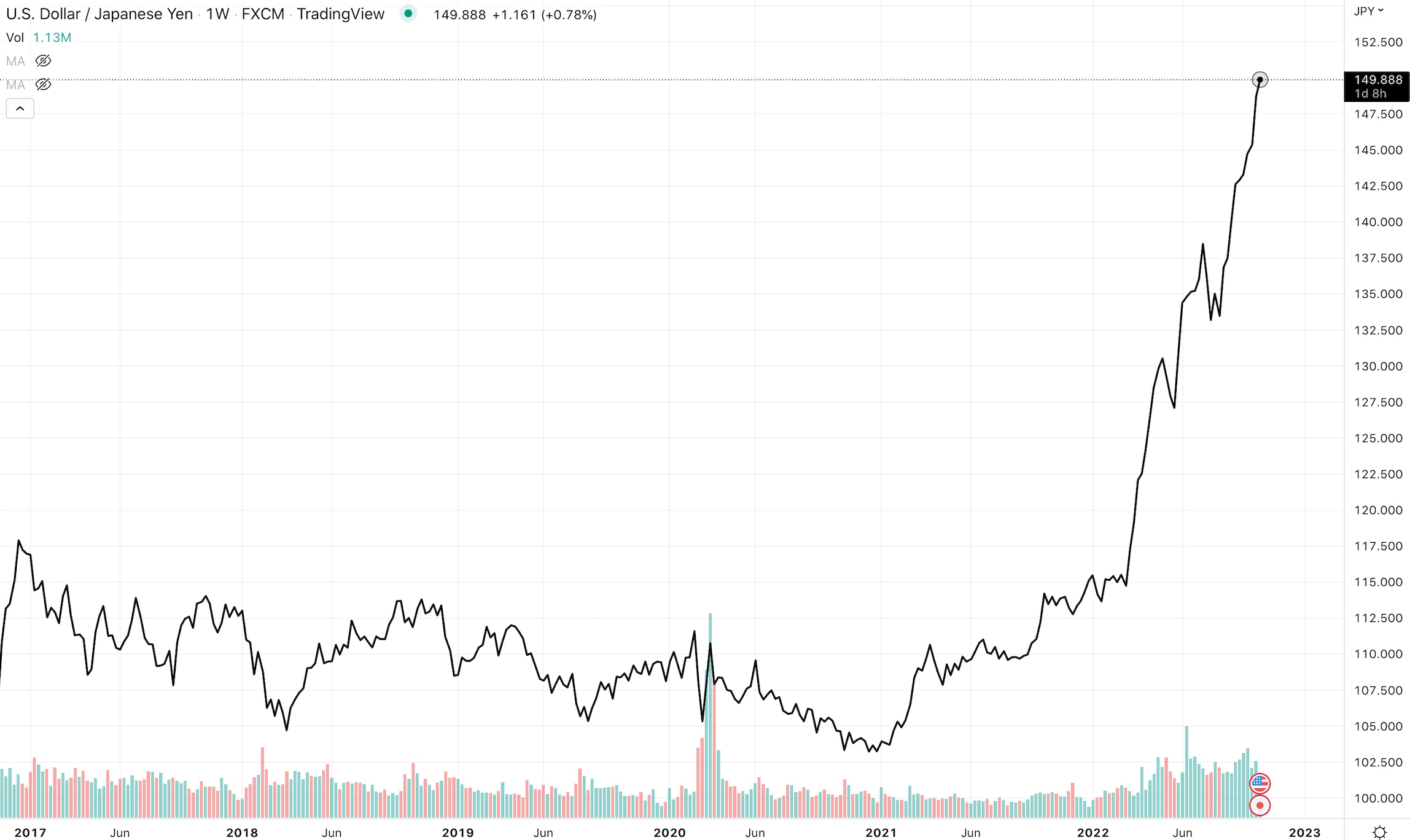 Less extreme versions of this phenomenon have been happening in other countries as well, causing their currencies to significantly depreciate against the USD. One of the reasons why we saw the euro reach parity with the dollar.

Due to its status as the reserve currency, 87% of world trade is conducted in US dollars. So, whenever a country needs to import corn, wheat, oil, copper or any other commodity, it does so mostly in USD. The dollar’s strength has, therefore, started causing serious problems in developing countries, where governments and companies must use increasing amounts of their own currency to provide the basic goods for their citizens. Consider that a year ago, $100 was worth1,572 Egyptian pounds, 117,655 Korean won, and 41,244 Nigerian naira. Purely because of the strength in USD (assuming no inflation or price increases), the same $100 is worth 1,950 Egyptian pounds; 143,158 won and 43,650 naira. The US is essentially exporting inflation around the world, putting enormous strain on countries like Somalia, where the risk of widespread starvation lurks. 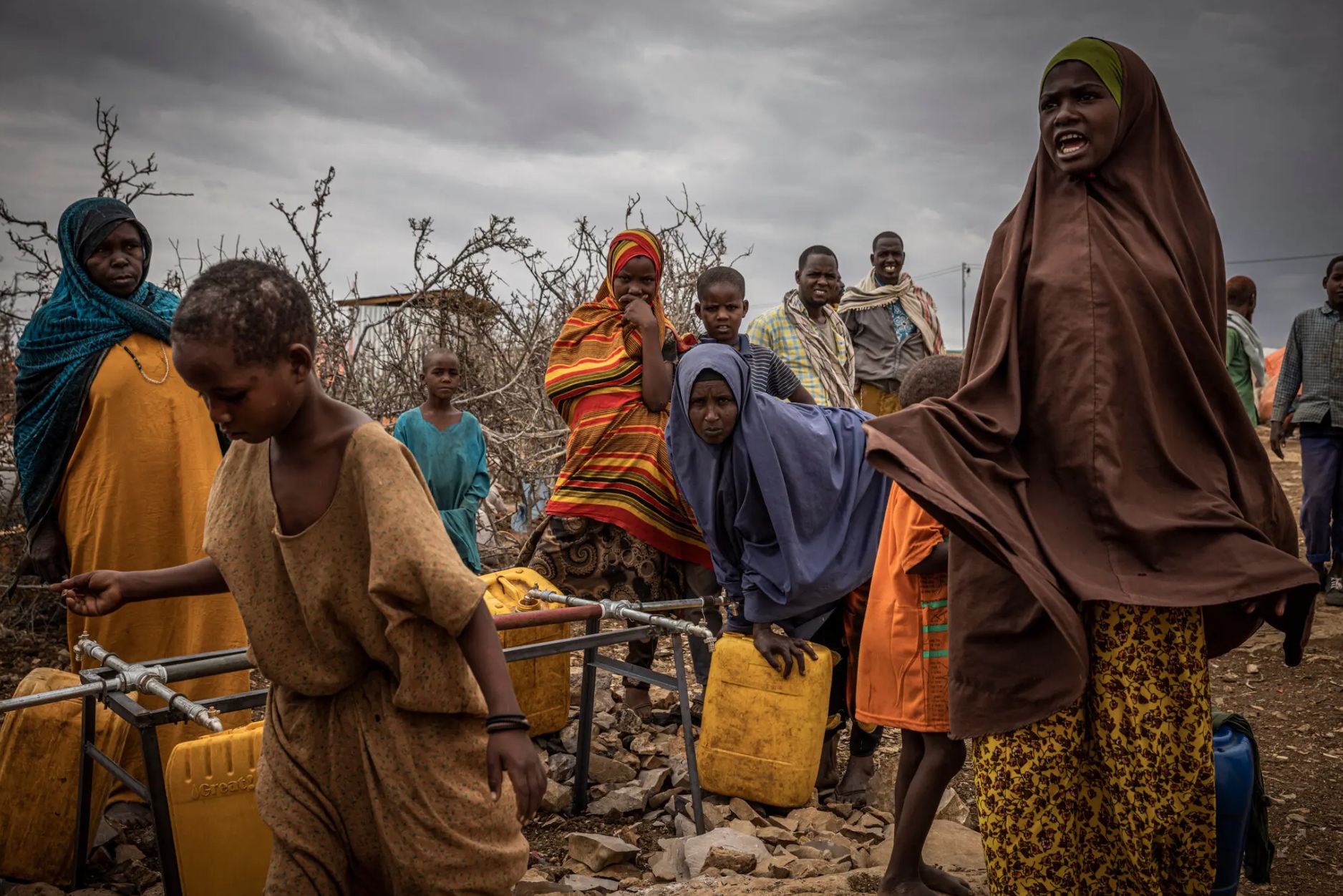 Countries mostly do not have the option of choosing a currency when conducting international trade. Sellers ask for US dollars because they can either use it for other commerce transactions or store it as exchange reserves. These elements further support the never-ending loop of dollar hegemony.

The endless dollar loop does not end at trade. Nations also heavily borrow in US dollars. Nearly 60% of all global debt is denominated in USD. The reasoning is directly linked to the aspects mentioned above. Countries borrow to conduct other activities, like buying raw materials or undertaking infrastructure projects. The material, workers and contractors needed for the projects all ask to be paid in dollars. Thus countries are indirectly forced to borrow USD. The borrowing consequently creates another demand channel for the US dollar.

The system works fine until you get to a point when the dollar is too strong. Countries, especially poorer nations, start having problems repaying the debt. As the USD appreciates, their interest payments rise in terms of their home currency. Sri Lanka is an unfortunate example of this phenomenon. Rising import costs coupled with a high level of USD-denominated debt eventually led to its default. Consequences for common people are significant as they struggle to get their hands on basic products like gasoline or food.

Additional to all the factors mentioned above, the US dollar is considered a safe place to store your money. Therefore, during turbulent times, we can see a flight into USD, further increasing already high demand levels. Most economies also tend to pile up large USD exchange reserves during good times in case of a downturn or any other undesirable scenario. For this exact reason, Japan amassed almost $1.2 trillion, which is now used to support the struggling currency.

Assets are getting hurt

A strong US dollar negatively affects almost all assets, hence why it is sometimes referred to as a wrecking ball. By observing the markets, you would soon notice a clear pattern; when the dollar moves strongly higher, most assets take a beating. Foreign companies are getting hurt because their import costs are going up. Most US companies also get hurt because at least some part of their business is usually conducted abroad, and a strong dollar makes them less competitive. And commodities fall because they are directly priced in USD.

Cryptocurrencies, unfortunately, also cannot escape the dollar tsunami. The reason is similar to what happens to commodities. A majority of cryptocurrency trades are denominated in USD; with Bitcoin, the exact number is about 70%. It is even clearer when you realize that essentially all frequently used stablecoins are pegged to USD. Therefore, if we continue to see strength in the US dollar, it will likely create headwinds for crypto prices. 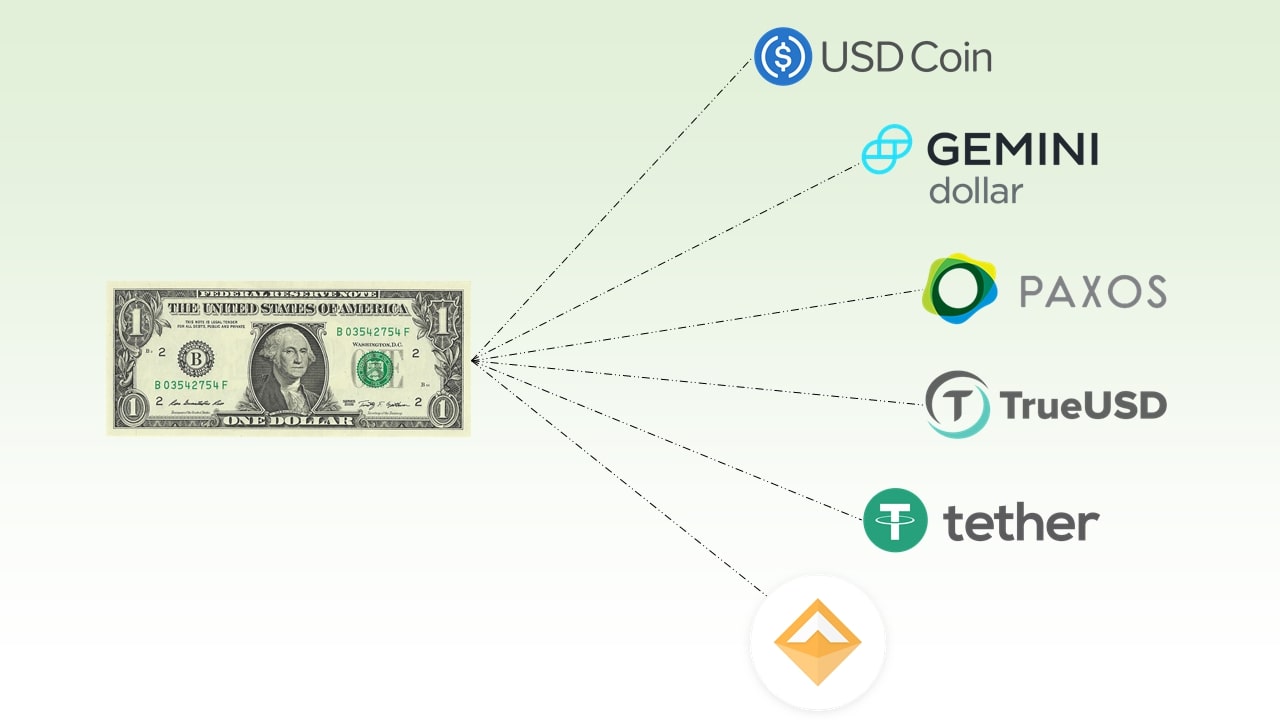 This is why the US economy is always at the centre of attention. Every decision that the FED makes influences all other markets. It is this sign of economic power that makes some people concerned.

Unfortunately, the current environment does not suggest the dollar strength is at its peak, even though it is perhaps slowly approaching it. One sign of a turnaround would be slowing inflation in the US. That would allow the FED to step on the brakes at its interest rate policy and probably cause USD to retreat. However, inflation is a difficult beast to tame, and the FED will want to be certain that inflation is significantly slowing before they change their monetary stance.

However, countries around the world are already raising complaints. The USD wrecking ball is starting to produce cracks across the global economy, and poorer nations are at serious risk of collapsing. The global trading system and the dollar’s position as a reserve currency create too much USD demand during times like these. In the future, it might eventually lead to something similar to a Plaza accord, and some even argue that it’s time to end its status as a world reserve currency. Brent Johnson created the prevalent Dollar Milkshake Theory, which assumes that one of these periods of the USD strength ends in the fallout of global markets. The demise of the dollar might eventually arise from its strength and not its weakness. 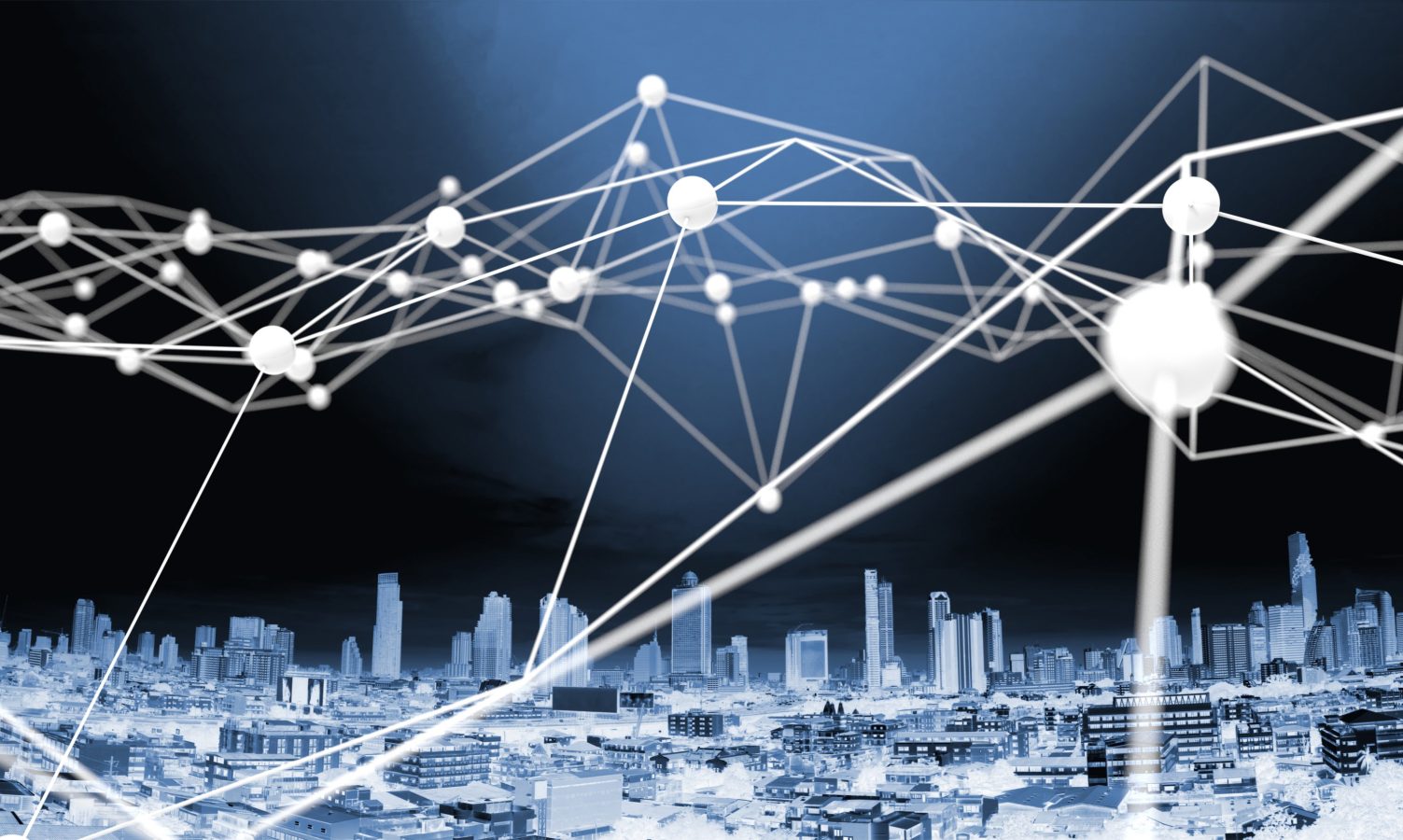 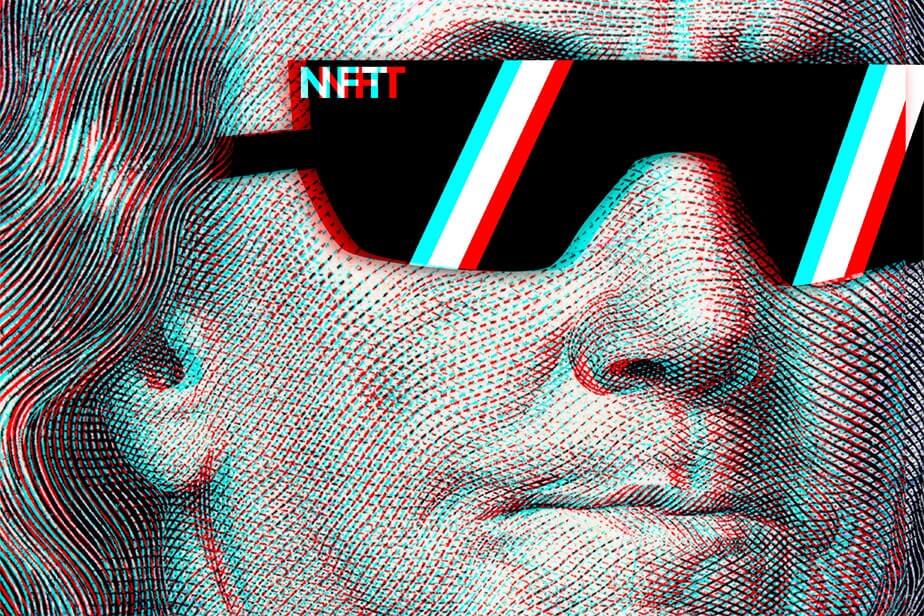 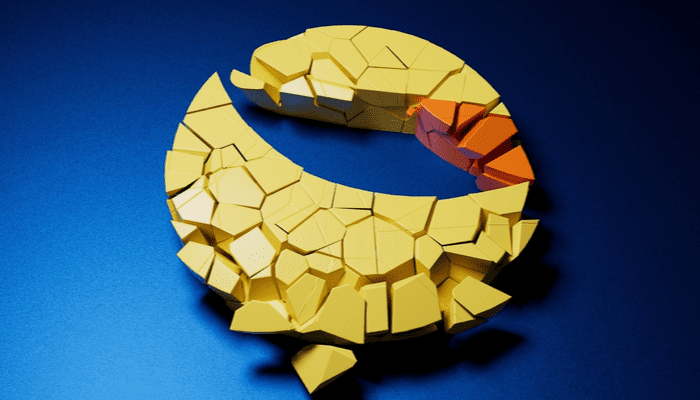